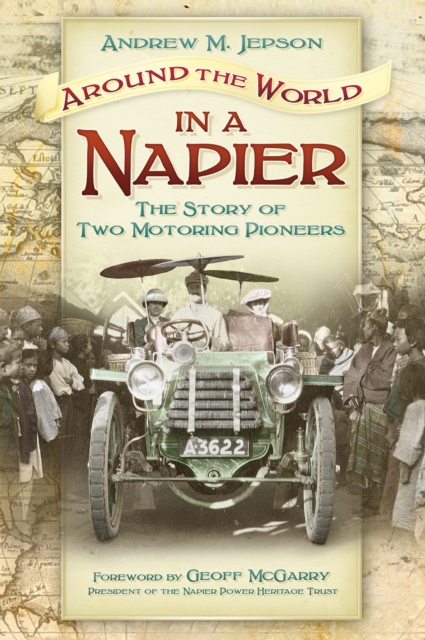 Around the World in a Napier : The Story of Two Motoring Pioneers Paperback / softback

In the nineteenth century, Jules Verne imagined a journey round the world.

At the start of the twentieth century, an American millionaire, Charles J.

Glidden, did it for real - though it took many more than eighty days.

Assisted by Charles Thomas, a Sussex engineer, the millionaire took his Napier car twice around the world, to places that had never seen a powered vehicle.

The journeys took them across thirty-nine countries on four continents.

In Switzerland they were arrested for driving on a forbidden road.

Later they fitted the car with railroad wheels and drove to Vancouver on the tracks of the Canadian Pacific.

During their travels they met people of all kinds, from impoverished pilgrims to maharajahs.

In Fiji there was an encounter with the last cannibal; in militarist Japan they experienced anti-Western attitudes. Andrew Jepson tells the fascinating story of these ground-breaking journeys with the aid of images taken from Charles Thomas' own photograph albums.

This is a must-read for all motoring enthusiasts.