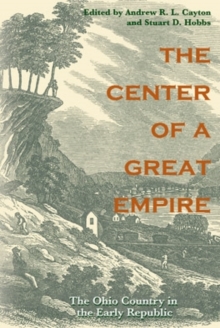 The Center of a Great Empire : The Ohio Country in the Early Republic Paperback / softback

"The Center Of A Great Empire: The Ohio Country in the Early Republic" chronicles a dramatic change in Ohio, which grew from a forested borderland in 1780 to a bustling region of prosperous farms and towns in 1830.

Contributors to this book address the conquest of Native Americans, the emergence of a democratic political culture, the origins of capitalism, the formation of public culture, the growth of evangelical Protestantism, and the ambiguous status of African Americans.

Now available in paperback, "The Center of a Great Empire" illuminates key themes in the history of the United States.