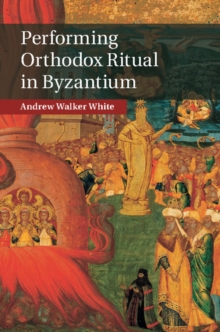 In this groundbreaking, interdisciplinary study, Andrew Walker White explores the origins of Byzantine ritual - the rites of the early Greek Orthodox Church - and its unique relationship with traditional theatre.

Tracing the secularization of pagan theatre, the rise of rhetoric as an alternative to acting, as well as the transmission of ancient methods of musical composition into the Byzantine era, White demonstrates how Christian ritual was in effect a post-theatrical performing art, created by intellectuals who were fully aware of traditional theatre but who endeavoured to avoid it.

The book explores how Orthodox rites avoid the aesthetic appreciation associated with secular art, and conducts an in-depth study (and reconstruction) of the late Byzantine Service of the Furnace.

Often treated as a liturgical drama, White translates and delineates the features of five extant versions, to show how and why it generated widely diverse audience reactions in both medieval times and our own.