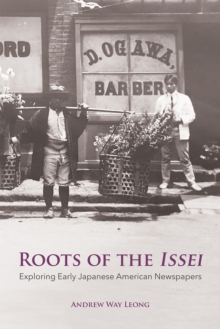 Roots of the Issei presents a complex and nuanced picture of the Japanese American community in the early twentieth century: a people challenged by racial prejudice and anti-Japanese immigration laws trying to gain a foothold in a new land while remaining connected to Japan.

In the process, he suggests these widely-used generational concepts are in fact a recent construct.

With this technology, Leong is able to analyze materials that until recently were regarded as beyond computer-aided analysis, due to difficulties presented by the complexity of Japanese language.

With access to these primary sources, Leong is able to upend several scholarly assumptions and beliefs and present a never-before-seen picture of Japanese American struggles-both with an adversarial host country and among themselves-backed by the authority of primary sources.