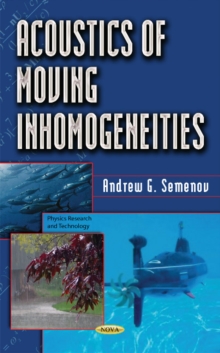 A new approach to the theory of sound scattering, diffraction and propagation in slightly compressible media containing moving inhomogeneities is presented.

The main concept of this approach lies in enriching the acoustic properties of the media by the consideration of the inhomogeneities motion together with the contribution of media flow generated by them.

Both factors are conventionally ignored in classic wave scattering theory.

Inhomogeneous media are usually presented as continuous with supposed local statistical properties distribution while structural specifics and motion of medium components are ignored being excused by their extremely small Mach numbers.

However, this approximation is valid for electromagnetic wave scattering only.

The analogy between sound and electromagnetic wave propagation in inhomogeneous moving media fails in acoustics of media with moving inhomogeneities.

The presented conclusions are based on analytical solutions of sound scattering problems for the Lighthill equation related to a body moving in ideal or viscous media with an arbitrary relationship between sound wavelength and body dimension.

The contribution of the ambient flow around moving scatterer to total sound scattering is shown to be at least comparable to the scatterer body motion contribution.

Under certain conditions, such as for small moving particles in viscous media, the particle body contribution to scattering as a whole could be safely ignored with respect to the ambient flow contribution.

As a result the classic Rayleigh law is to be modified and a few fundamental relationships substituting it are derived.

The obtained results are important for a wide range of acoustic problems arising in moving inhomogeneous media, from sound scattering in atmosphere or ocean to sound decay in colloid particle solutions.

The consideration of the contribution of the ambient flow to the sound diffraction by a large moving body is shown to be necessary as well.

This is why a lot of known diffraction problems, for example such that are used for underwater acoustic system efficiency evaluation should be revised.

A few examples of our results are: sound decay predictions in atmospheric precipitation, in turbulent media and in colloid solution of suspended particles involved in Brownian motion.

Moreover, some experimental data that were unexplained up to this point are now clarified in light of this new theory.

At the same time, we show the necessity of performing additional experiments based on theory predictions.