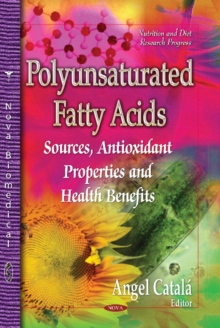 During the last four decades, the interest in polyunsaturated fatty acids (PUFA) has augmented manifolds, and the number of published studies is rising each year.

The current impetus for this interest has been mainly the observation that PUFA and their metabolites have several physiological roles including: energy provision, membrane structure, cell signalling and regulation of gene expression.

In addition, the observation that PUFA are targets of lipid peroxidation opens a new important area of investigation.

This new book presents and discusses current research on the biochemical diversity of the lipids and fatty acids contained in various species of microalgae of marine and fresh water environments, the sources and synthesis of PUFA in macroalgae, the nutritional properties of algal PUFA and their potential for future dietary use, as well as the health implications of dietary algal PUFA, notably their effects on inflammatory disorders and brain development and function.