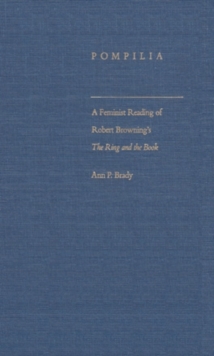 Pompilia : A Feminist Reading of Robert Browning's the Ring and the Book Hardback

When Count Guido Franceschini was tried by a Roman court in 1698 for the rape and murder of his young wife Pompilia, he had the church, the state, and \u201call of sensible Rome\u201d supporting him.

Their cynical mandate sprang from the traditional belief that in a patriarchal society the male should wield absolute power, including the power of life and death, over the female.

In Pompilia, Brady discusses how Browning's masterpiece exposes the pervasive misogyny of patriarchal culture justified in the principle of honoris causa jealously guarded by church and state. From his letters it is clear that the poet parallels the Rome of the Franceschini trial with the patriarchy of Victorian England.

Tracing the classical sources of institutionalized misogyny - from Aristotle to Justinian to Livy, from Genesis through the New Testament - Brady shows how ancient and pervasive is the patriarchal system and argues that the woman thus defined by traditional theology is identical to the pornographer's definition of woman: the woman made for the man. Confronting the problem of sexual cynicism among interpreters of The Ring and the Book from Thomas Carlyle to the present, Brady examines the character of Pompilia - the victim on trial essentially for the crime of being raped and murdered.

She examines the explicitly sexual degradation of Pompilia by Guido and his priest brother, and she points out the sexual bias rampant in the trial proceedings, a bias that reveals the ecclesiastical corruption surrounding the institution of marriage. One of the first book-length studies of Browning's feminism, Brady's study makes valuable interpretive contributions to The Ring and the Book, and should earn the poem new readers among both feminists and traditionalists.