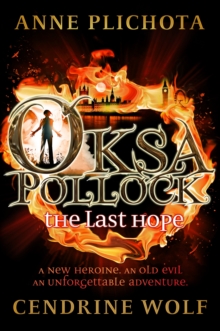 A New Heroine. An Old Evil. An Unforgettable Adventure. A thrilling new supernatural adventure series. Fuses the excitement, action and extraordinary worlds of Harry Potter, I Am Number Four and Buffy the Vampire Slayer with an inspirational new teen heroine. Oksa Pollock is a normal thirteen-year-old girl, starting a new life in London.

But bizarre things start happening around Oksa-she finds she can produce fire from her hands, move objects with her mind, and even fly. Finally the truth emerges...her family fled Edefia, their magical, hidden homeland years ago. And more than that: Oksa is their queen... Oksa will be thrown into a wilder adventure than she could ever have imagined.

She must triumph over her enemies. The whole of Edefia is counting on her. A new family moves in near Vitello, only they don't have a cool boy for him to play with, just a yucky girl. And it won't be fun to play with a yucky girl and her crazy hamster.

Definitely not. About the Author After studying Chinese language and culture, Anne Plichota lived and worked in Korea and China.

Her past jobs included working as a Chinese teacher, a nurse's aide, a public letter writer, and most recently a librarian.

She enjoys American and Gothic literature and hearing people's stories.

She lives in Strasbourg with her teenage daughter. Cendrine Wolf studied sports, and went on to work as a social worker in deprived neighbourhoods.

She taught herself illustration, and loves fantasy literature and speed 'in all its forms'.