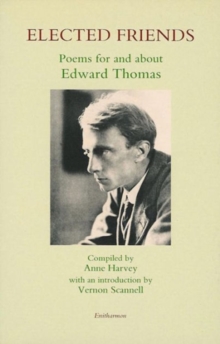 Elected Friends : Poems for and About Edward Thomas Paperback / softback

As Vernon Scannell points out in his introduction, the poetry and prose of Edward Thomas (1878-1917) has always attracted an admiring and devoted readership, especially among other poets, who have valued it for its great originality and beauty.

In this anthology of poems for and about Edward Thomas, Anne Harvey has compiled a fascinating testimony of the influence Thomas has had both on his contemporaries and on subsequent generations of poets.

Among the elegies and tributes of his contemporaries are poems by Robert Frost, Walter de la Mare, Eleanor Farjeon, W.

H. Davies, Wilfrid Gibson and Ivor Gurney; a younger generation is represented by Alun Lewis, Norman Nicholson and Geoffrey Grigson; and then to give an impression of the enduring importance of Thomas there are poems by distinguished writers of the present time, including Derek Walcott, Elizabeth Jennings, Dannie Abse, P.J.