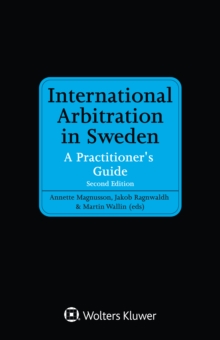 Sweden is one of a handful of countries where the international arbitral process has reached a stage where the jurisprudence is replete with instances involving no local parties at all. In this context of credible neutrality, the Arbitration Institute of the Stockholm Chamber of Commerce (SCC) has emerged as a leading global arbitral institution. Whether the matter at issue is a business transaction dispute or a politicized conflict involving obdurate parties, the richness of its body of decided cases manifests the SCC's authority and reliability throughout the converging world of international arbitration.

The present book, written by sixteen eminent practitioners and now in its second edition, provides a practical guide to international arbitration in Sweden, whether ad hoc or institutional. Among the many elements of practice and procedure detailed are the following:

In addition, readers will be exposed to a trove of pertinent references to important decisions that have, in recent decades, been generated by the stream of major international arbitrations conducted in Sweden.

Disputing parties wishing to know what will happen when their case is brought to Sweden for arbitration will find no clearer or more thorough guide. This book is an incomparable source for anyone called upon to act as arbitrator or counsel, or in any other capacity, in international arbitration in Sweden.