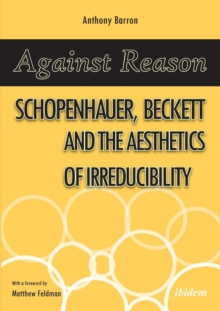 Against Reason : Schopenhauer, Beckett and the Aesthetics of Irreducibility Paperback / softback

Anthony Barron explores the relationship between the philosophy of Schopenhauer and the forms and themes of Becketts critical and creative writings.

He shows that Becketts aesthetic preoccupations are consonant with some of Schopenhauers seminal arguments regarding the arational basis of artistic composition and appreciation and the impotence of reason in human affairs.

While Becketts critical writings are, in places, formidably opaque, this work examines the ways in which such texts can be elucidated when their intertextual affinities with Schopenhauers arguments are revealed.

Using Schopenhauers thought as a presiding interpretative framework, Barron demonstrates how the widespread presence of philosophical and theological ideas in Becketts creative texts signifies less about his personal convictions than it does about his authorial aims.

He thereby highlights the ways in which discursive ideas were appropriated and manipulated by Beckett for purely literary ends.

A central contention of this book is that to judge the place of ideas within Becketts art, we should ignore questions of their theoretical persuasiveness and consider their role as purely aesthetic devices, the value of which is revealed in terms of the existential impact they have upon his characters.

In each of the chapters that deal with Becketts fiction, Barron underscores the artistically energizing tensions that exist between the concepts that Becketts characters invoke in their attempts to comprehend the import of their experiences and their conative and affective tribulations which invariably prove resistant to such analysis.

Here the means by which such conceptual aporias engender semantic potentialities underpin an exploration of Becketts creative assimilation of rational discourse.

While the focus of this publication is upon Becketts early and middle fiction, which was composed at a time when the relationship between the chaos of quotidian ordeals and the value of rational thought became most acutely relevant for him, numerous cross-references to his dramatic and poetical works are provided in order to highlight the overall significance of these issues within his oeuvre.