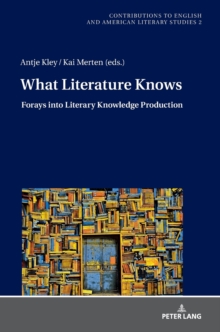 This volume sheds light on the nexus between knowledge and literature.

Arranged historically, contributions address both popular and canonical English and US-American writing from the early modern period to the present.

They focus on how historically specific texts engage with epistemological questions in relation to material and social forms as well as representation.

The authors discuss literature as a culturally embedded form of knowledge production in its own right, which deploys narrative and poetic means of exploration to establish an independent and sometimes dissident archive.

The worlds that imaginary texts project are shown to open up alternative perspectives to be reckoned with in the academic articulation and public discussion of issues in economics and the sciences, identity formation and wellbeing, legal rationale and political decision-making.