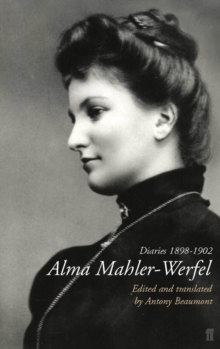 Born in 1879 in Vienna, Alma Mahler-Werfel was the daughter of the popular landscape painter, Emil J.

Schindler. Her stepfather, Carl Moll, was instrumental in forming the Secession movement and she became the pupil, friend and lover of many famous men, including Alexander Zemlinsky, Gustav Klimt and Max Burckhard.

In 1902 she married Gustav Mahler. After his death she married Walter Gropius, had a liaison with Oskar Kokoschka, and later married Franz Werfel.

As a young girl she began writing a diary. This selection from four years of that diary gives a breathtaking (and breathless) account of cultural life in Vienna at the turn of the twentieth century.

With their mixture of beady-eyed observation and impassioned confession, the pages of Alma Mahler-Werfel's diary make for gripping reading.