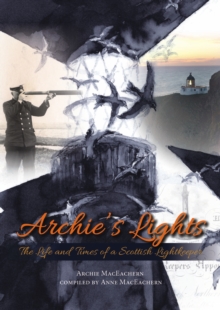 Archie's Lights : The Life and Times of a Scottish Lightkeeper Paperback / softback

Born at a clifftop lighthouse in 1910, Archie's life was spent in the world of Scottish lighthouses - he was one of the third generation of his family in the service of the Northern Lighthouse Board. Archie's stories have gripped listeners of all ages and have now been compiled by Anne MacEachern.

Written in Archie's words, this account portrays the man and reveals a past way of life.

From peacetime through war, dealing with goats, shipwrecked sailors or German spies, the story brings vividly to life the challenges of living and working at a lighthouse, including raising a young family at such an isolated and potentially dangerous place. Many characters appear at various lights, each with their own personality and often annoying habits.

Short-term transfers took place in and just after World War 2 when communications and transport were particularly difficult.

There were hardships and rewards, and a mystery to solve: the well-known disappearance of three keepers at the Flannan Isles in 1900. The men had to be - and were - remarkably resourceful and courageous, although not all could stand the isolation and dangers at offshore pillar rock lights, especially in wartime.

The sea ruled their lives - creating idyllic periods on sunny, calm days but being uncontrollably destructive for much of the time.

Like his colleagues, Archie upheld to the best of his ability the ideal of their Service, `For the Safety of All', but in his younger days he was not afraid to speak up and press, with others, for better conditions.

His service as a full-time keeper continued in part-time capacities, extended over a period of 67 years.

Through this man's keen eye, the reader will meet people, birds, animals and situations from a lifetime of service; a revealing glimpse into this close-knit world.

There is also humour, often that dry Highland humour, which adds spice to the telling; in Archie's case a fondness for wild places and dried figs helped.