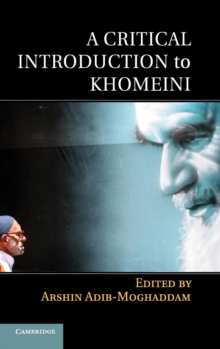 A Critical Introduction to Khomeini Hardback

As the architect of the Iranian Revolution of 1979, Ayatollah Khomeini remains one of the most inspirational and enigmatic figures of the twentieth century.

The revolution placed Iran at the forefront of Middle East politics and the Islamic revival.

Twenty years after his death, Khomeini is revered as a spiritual and political figurehead in Iran and in large swathes of the Islamic world, while in the West he is remembered by many as a dictator and the instigator of Islamist confrontation.

Arshin Adib-Moghaddam brings together distinguished and emerging scholars in this comprehensive volume, which covers all aspects of Khomeini's life and critically examines Khomeini the politician, the philosopher, and the spiritual leader, while considering his legacy in Iran and further afield in other parts of the Islamic world and the West.

Written by scholars from varying disciplines, the book will prove invaluable to students and general readers interested in the life and times of Khomeini and the politics that he inspired.