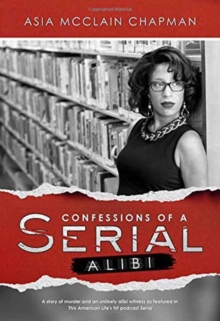 Confessions of a Serial Alibi Hardback

A story of murder and an unlikely alibi witness as featured in This American Life's hit podcast Serial. In 1999 Adnan Syed was arrested for murdering his ex-girlfriend Hae Min Lee.

But at the same time he was accused of the crime, Asia McClain claims she saw Syed at the local library. When McClain hears of Syed's arrest, she wrote to him to let him know that she might be his alibi.

In spite of the opportunity to have him proven innocent, Syed's attorney did not take any action.

Later, his attorney was disbarred due to numerous health problems including multiple sclerosis.

She died in 2004. Over a decade after Syed's arrest, This American Life's Sarah Koenig investigates the old case.

Her interviews with McClain become the first subject of Koenig's hugely successful podcast Serial and the story became an international internet phenomenon. Determined to set the record straight and the truth free, McClain reaches out to Syed's new defense attorney and on November 6, 2015, the court ordered an investigation to determine whether Syed's case be re-opened "in the interests of justice for all parties." Finally, McClain can become the key alibi witness that she was always meant to be. Now, in Confessions of a Serial Alibi, Asia McClain tells her story for the very first time.