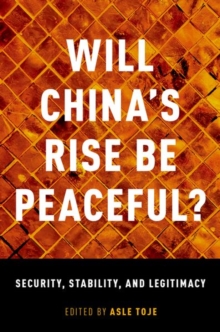 The rise of China will undoubtedly be one of the great spectacles of the twenty-first century.

More than a dramatic symbol of the redistribution of global wealth, the event has marked the end of the unipolar international system and the arrival of a new era in world politics.

How the security, stability and legitimacy built upon foundations that were suddenly shifting, adapting to this new reality is the subject of Will China's Rise be Peaceful?

Bringing together the work of seasoned experts and younger scholars, this volume offers an inclusive examination of the effects of historical patterns-whether interrupted or intact-by the rise of China.

The contributors show how strategies among the major powers are guided by existing international rules and expectations as well as by the realities created by an increasingly powerful China.

While China has sought to signal its non-revisionist intent its extraordinary economic growth and active diplomacy has in a short time span transformed global and East Asian politics.

This has caused constant readjustments as the other key actors have responded to the changing incentives provided by Chinese policies.

Equally grounded in theory and extensive empirical research, this timely volume offers a remarkably lucid description and interpretation of our changing international relations.

In both its approach and its conclusions, it will serve as a model for the study of China in a new era.