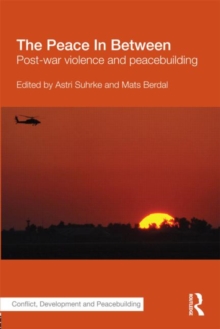 The Peace In Between : Post-War Violence and Peacebuilding Paperback / softback

Part of the Studies in Conflict, Development and Peacebuilding series

This volume examines the causes and purposes of 'post-conflict' violence. The end of a war is generally expected to be followed by an end to collective violence, as the term `post-conflict' that came into general usage in the 1990s signifies.

In reality, however, various forms of deadly violence continue, and sometimes even increase after the big guns have been silenced and a peace agreement signed.

Explanations for this and other kinds of violence fall roughly into two broad categories - those that stress the legacies of the war and those that focus on the conditions of the peace.

There are significant gaps in the literature, most importantly arising from the common premise that there is one, predominant type of post-war situation.

This `post-war state' is often endowed with certain generic features that predispose it towards violence, such as a weak state, criminal elements generated by the war-time economy, demobilized but not demilitarized or reintegrated ex-combatants, impunity and rapid liberalization. The premise of this volume differs. It argues that features which constrain or encourage violence stack up in ways to create distinct and different types of post-war environments.

Critical factors that shape the post-war environment in this respect lie in the war-to-peace transition itself, above all the outcome of the war in terms of military and political power and its relationship to social hierarchies of power, normative understandings of the post-war order, and the international context. This book will of much interest to students of war and conflict studies, peacebuilding and IR/Security Studies in general.