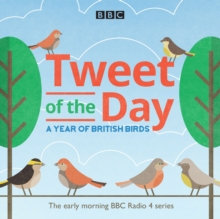 Tweet of the Day : A Year of British Birds CD-Audio

The complete first series of Tweet of the Day, with introductions by Sir David Attenborough, Chris Packham, Kate Humble and many others.

First heard every weekday morning at 5.58am on BBC Radio 4, Tweet of the Day captured the imagination of early risers and bird lovers, proving so popular that it was named Radio Programme of the Year 2014.

Each episode begins with a bird call or song, followed by fascinating ornithological detail about its owner.

This collection contains every edition from the first series, British Birds.

The songs of over 260 birds can be heard over the course of a year, from the Cuckoo's call in spring to the summer seaside sound of the Herring Gull, the autumn song of the Robin and the Song Thrush's voice of hope in the depths of winter.

Featuring a mix of native birds, such as the Blackbird and Tawny Owl, and migrant visitors including the Icterine Warbler and Ortolan Bunting, the series provides memorable insight into their behaviour and habits, explains their literary or folkloric associations, and tells stories of scientific or conservation success. 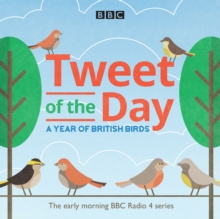