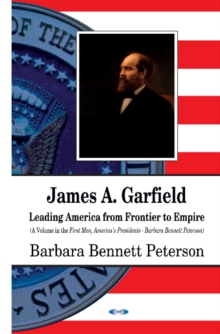 James A Garfield : Leading America from Frontier to Empire Hardback

The Age of President Garfield was an exciting age as it featured the music of John Philip Sousa's marching bands, the new dime novels, captains of industry such as John D Rockefeller, legendary cowboys of the Old West, the Indian Wars, and the expansion of America's interest in empire building abroad.

James A Garfield rose from birth in a log cabin in Ohio, to work as a canal boy, earned an education at Ceauga Academy, Western Reserve Eclectic Institute, and graduated from Williams College in 1856.

He became president of Western Reserve in 1857, studied law, married Lucretia Randolph, and was elected to the Ohio Senate in 1859.

During the Civil War, he became a hero, earned the rank of Major General and assisted General William S Rosecrans as his Chief of Staff.

Elected to the U.S. House of Representatives in 1862, he was a Radical Republican seeking to redeem the South and protect the freedmen.

President with Chester A Arthur as his Vice President.

This book is a rich tapestry filled with characters, events, institutions, and causes dominating the era.

Roscoe Conkling, James G Blaine, Andrew Carnegie, King Kalakaua of Hawaii, Queen Victoria, and Gilbert and Sullivan are a few of the parallel characters, and the creation of the United States Geological Survey, expansion of the Smithsonian and the Library of Congress, and the American chapter of the Red Cross are some of the enduring legacies.

Garfield's era saw the invention of the Bessemer steel process and the Otis elevator, the coming of the street trolley and gas lighting, immigrants pouring into Industrialising America and the formation of workers' unions.

Garfield's presidency was at the height of the Gilded Age, one of the most fascinating moments in all of American history.

This book must be read to understand how America moved from frontier to empire.

A sophisticated and nuanced treatment of President James A Garfield.