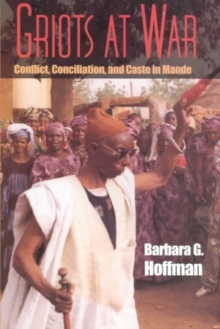 Griots at War : Conflict, Conciliation, and Caste in Mande Hardback

HoffmanAn extraordinary account of conflict and peacemaking among griots. "... a compelling study of how social identities and relationships are constructed and reconstructed through action, specifically through speech....

The book succeeds marvelously in conveying the voice of the people who are, in every sense of the word, its subject." -Robert LaunayIn 1985, while she was an apprentice griot or jelimuso, Barbara G.

Hoffman saw and recorded a remarkable event in the small town of Kita, Mali.

For four days, thousands of griots from all parts of the Mande world gathered to talk, sing, and make music in celebration of the opening of the new Hall of Griots and the installation of the recently named Head Griot.

This unprecedented assembly also marked the end of a deadly two-year conflict fought with griot weapons-words, reputations, and sorcery.

Her discerning interpretations of the speeches not only explore the art of griot oratory but show how the use of history, metaphor, religion, proverbs, and praise can mend a community torn apart by war.

The speeches, often marked by a keen edge, also reveal what it means to be a griot in a casted society and to demand that other castes recognize and respect this unique identity.

The griot's formidable linguistic abilities come to the fore as they negotiate, reestablish, and assert their cultural power.

This exceptional book, including generous extracts from the griots' speeches in Mande and in translation, offers surprising and important insights into the multiple meanings of Mande culture, caste, and identity. Barbara G. Hoffman is Assistant Professor of Anthropology at Cleveland State University.

She is author of many essays on Mande culture and producer of ethnographic videos on East and West African cultures.

She is known to the Mande griot community as Jeli Jeneba Jabate. Contents Prologue: An Invitation to WarPower and Paradox: Griots and Mande Social OrganizationIn the Hands of Speech: Mande DiscourseA History of Fadenya: Interpretations of the Kita Griot WarMaking Boundaries: When Griots Speak before NoblesBreaking Boundaries: When Nobles Speak before GriotsThe Healer Who Is Ill Must Swallow His Own Saliva: When Griots Speak to GriotsCaste, Mande StyleEpilogue: A Wound Cannot Heal on Pus