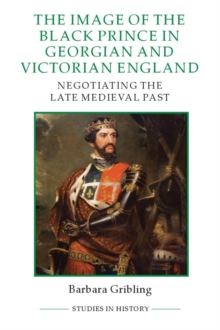 During the Georgian and Victorian periods, the fourteenth-century hero Edward the Black Prince became an object of cultural fascination and celebration; he and his battles played an important part in a wider reimagining of the British as a martial people, reinforced by an interest in chivalric character and a burgeoning nationalism. Drawing on a wealth of literature, histories, drama, art and material culture, this book explores the uses of Edward's image in debates about politics, character, war and empire, assessing the contradictory meanings ascribed to the late Middle Ages by groups ranging from royals to radicals.

It makes a special claim for the importance of the fourteenth century as a time of heroic virtues, chivalric escapades, royal power and parliamentary development, adding to a growing literature on Georgian uses of the past by exposing an active royal and popular investment in the medieval.

Disputing current assumptions that the Middle Ages represented a romanticized and unproblematic past, it shows how this investment was increasingly contested in the Victorian era. Barbara Gribling is an Honorary Fellow in Modern British History at Durham University.