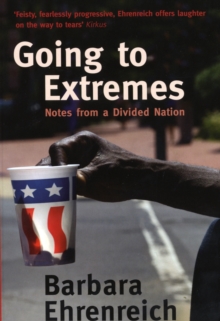 Going To Extremes : Notes from a Divided Nation Paperback / softback

America is a grotesquely polarized society and becoming more so all the time.

In this razor-sharp, funny and terrifying collection of pieces, Barbara Ehrenreich shows how the widening gap between rich and poor over the past eight years has left the country increasingly divided between the gated communities on the one hand and the trailer parks and tenements on the other.

She describes a country where the super-rich travel by private jet, while low-paid workers make multiple bus trips to get to their jobs; where a wealthy minority obsessively consumes cosmetic surgery, while the poor often go without basic health care for their children; where members of the moneyed elite can buy congressmen, while a troubling proportion of the working class can barely buy lunch.

Ehrenreich writes corruscatingly about the pay of CEOs, the treatment of illegal immigrants, the way Wal-Mart spies on and interrogates its employees, and the fact that in the US it's easier to get health insurance for a pet than for a child.