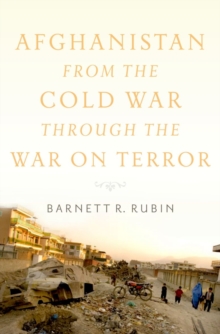 One of our foremost authorities on modern Afghanistan, Barnett R.

Rubin has dedicated much of his career to the study of this remote mountain country.

He served as a special advisor to the late Ambassador Richard Holbrooke during his final mission to the region and still serves the Obama administration under Holbrooke's successor, Ambassador Marc Grossman. Now Rubin distills his unmatched knowledge of Afghanistan in this invaluable book.

He shows how the Taliban arose in resistance to warlords some of whom who were raping and plundering with impunity in the vacuum of authority left by the collapse of the Afghan state after the Soviet withdrawal.

The Taliban built on a centuries-old tradition of local leadership by students and teachers at independent, rural madrasas-networks that had been marginalized by the state-building royal regimethat was itself destroyed by the Soviets and radicalized by the resistance to the invasion.

He examines the arrival of Arab Islamists, the missed opportunities after the American-led intervention, the role of Pakistan, and the challenges of reconstruction.

Rubin provides first-hand accounts of thebargaining at both the Bonn Talks of 2001 and the Afghan Constitutional Loya Jirga of 2003-2004, in both of which he participated as a UN advisor.

Throughout, he discusses the significance of ethnic rivalries, the drug trade, human rights, state-building, US strategic choices, and international organizations, analyzing the missteps in these areas taken by the international community since 2001.

The book covers events till the start of the Obama administration, and the final chapters provide aninside look at some of the thinking that is shaping today's policy debates inside the administration. Authoritative, nuanced, and sweeping in scope, Afghanistan in the Post-Cold War Era provides deep insight into the greatest foreign policy challenge facing America today.