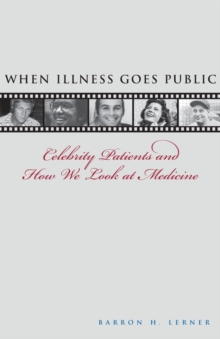 When Illness Goes Public : Celebrity Patients and How We Look at Medicine Paperback / softback

Steve McQueen had cancer and was keeping it secret.

Then the media found out, and soon all of America knew.

In When Illness Goes Public, Barron H. Lerner describes the evolution of celebrities' illnesses from private matters to stories of great public interest.

Famous people who have become symbols of illness include Lou Gehrig, the first "celebrity patient"; Rita Hayworth, whose Alzheimer disease went undiagnosed for years; and Arthur Ashe, who courageously went public with his AIDS diagnosis before the media could reveal his secret. And then there are private citizens like Barney Clark, the first recipient of a permanent artificial heart, and Lorenzo Odone, whose neurological disorder became the subject of a Hollywood film.

While celebrity illnesses have helped to inform patients about treatment options, ethical controversies, and scientific proof, the stories surrounding these illnesses have also assumed mythical characteristics that may be misleading. Marrying great storytelling to an exploration of the intersection of science, journalism, fame, and legend, this book is a groundbreaking contribution to our understanding of health and illness.