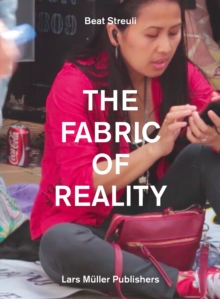 The Fabric of Reality Paperback / softback

With his new artist's book The Fabric of Reality, Beat Streuli for the first time lays a trail leading through his oeuvre.

Following Public Works (JRP Ringier, 2012), which delivered an overview of Streuli's installations from 1996-2011, the artist now links projects, photographs, and video stills from the past seven years with early black-and-white works.

Arranged in close succession and with frequent superimposition, the works create a visual rhythm that conveys an impression of an oeuvre marked by sober conceptual observation verging on documentary status.

Essays on the themes of urbanism and sociology, as well as on media theory and the theory of perception, embed Streuli's work in a discursive context.