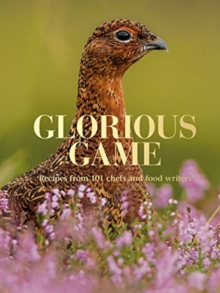 Game could help tackle these problems head on. It's an incredibly healthy source of food and much leaner than farmed meats, due to the natural diets of the animals and their active lifestyles.

There's no intensive farming and as game is mostly locally sourced, its carbon footprint is relatively small, with very few miles from 'nature to plate'. The book includes a unique collection of recipes using the whole range of game, including many that are achievable for the home cook: everything from a simple but brilliant game sandwich to a classic venison Wellington.

There are also more ambitious recipes requiring a fair bit of know-how, specialist kitchen equipment, a lot of time and advance planning. All proceeds from this book will directly benefit The Moorland Communities Trust and The Game and Wildlife Conservation Trust.

Both of these organisations exist to protect and promote the rural way of life that enables game to thrive. It's a simple fact that the more we get behind and support game now, the easier to obtain and more affordable it will become in the future.