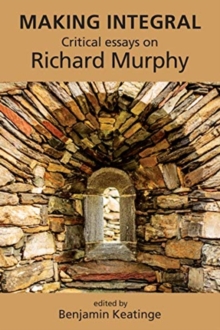 Richard Murphy's poetry is central to the evolution of Irish poetry since 1950.

With the publication of The Pleasure Ground: Poems 1952-2012 (2013) and the reissue of his celebrated memoir The Kick (Cork UP, 2017), this is a timely reconsideration of an important Irish poet. Sometimes viewed as a poet of two traditions who, in his own words, sought `to unite my divided self in our divided country', Richard Murphy (1927-2018) also engages with urgent contemporary themes: sexual and social identities, ecological crisis, postcolonial inheritance and the origins of conflict on the island of Ireland.

In essays by leading scholars from Ireland, Britain and the USA, this book broadens the contexts by which Murphy's poetic achievement can be interpreted and it addresses evolving issues in Irish literary studies: representations of violence, islands and archipelagos, the use of radio as medium, built heritage and the environment, and the aftermath of conflict.

Widely-debated topics in literary studies are explored including postcolonial theory, ecopoetics, theories of gender and sexuality, and autobiography/memoir.

Richard Murphy emerges as a contemporary voice whose poetry is central to an understanding of modern Ireland.

Benjamin Keatinge is a Visiting Research Fellow at the School of English, Trinity College Dublin.