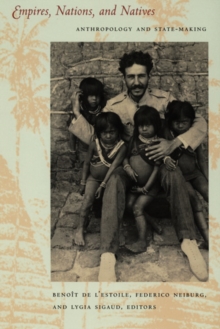 Empires, Nations, and Natives is a groundbreaking comparative analysis of the interplay between the practice of anthropology and the politics of empires and nation-states in the colonial and postcolonial worlds.

It brings together essays that demonstrate how the production of social-science knowledge about the "other" has been inextricably linked to the crafting of government policies.

Subverting established boundaries between national and imperial anthropologies, the contributors explore the role of anthropology in the shifting categorizations of race in southern Africa, the identification of Indians in Brazil, the implementation of development plans in Africa and Latin America, the construction of Mexican and Portuguese nationalism, the genesis of "national character" studies in the United States during World War II, the modernizing efforts of the French colonial administration in Africa, and postcolonial architecture.

The contributors-social and cultural anthropologists from the Americas and Europe-report on both historical and contemporary processes.

Moving beyond controversies that cast the relationship between scholarship and politics in binary terms of complicity or autonomy, they bring into focus a dynamic process in which states, anthropological knowledge, and population groups themselves are mutually constructed.