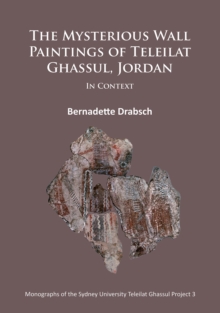 This volume is primarily concerned with the re-analysis of the wall paintings from the Jordanian Chalcolithic period (ca. 4700-3700 BC) settlement site of Teleilat Ghassul, first excavated in 1929 by scholars from the Pontifical Biblical Institute Rome and latterly by Australians from the University of Sydney.

The seven major paintings were re-analysed using a methodology based on contextualisation, digital reconstruction, experimental replication and subject analysis.

A comprehensive theoretical framework was constructed from published and unpublished materials from the site, consisting of geographical and environmental datasets, topographic, settlement-location and structural contexts.

These included material/artefactual associations, technological issues and a comprehensive symbolic regional comparative analysis of the artworks themselves.

The interpretive structure, reconstructed and re-evaluated scenes, and replication studies, have revealed numerous insights into the artistic traditions and cultic practices of South Levantine Ghassulian Chalcolithic culture, with considerable relevance to the ongoing debate on such matters as prehistoric societal makeup and art historical scholarship.

This study has provided intriguing glimpses into the lives of a brilliantly artistic and deeply ritualised society, shedding new light on this little-known and still mysterious people.