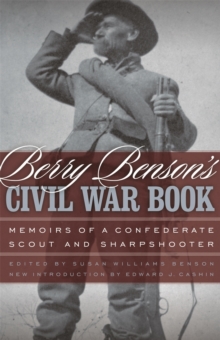 Confederate scout and sharpshooter Berry Greenwood Benson witnessed the first shot fired on Fort Sumter, retreated with Lee's army to its surrender at Appomattox Courthouse, and missed little of the action in between.

This classic account of his wartime service is filled with the minutiae of the common soldier's life and paced by a continual succession of battlefield anecdotes.

At seventeen, after leaving his home near Augusta, Georgia, to join the army, Benson soon distinguished himself as a crack shot, natural leader, and sure judge of human nature - abilities that would serve him well as a scout.

Benson's reconnaissance exploits took him within earshot of Union trenches and encampments.

On the battlefield, he saw firsthand the desperation of a frontal charge and the blind panic of a disorganized retreat.

Benson's odyssey as a prisoner of war took him to Elmira Prison in New York, where he joined the only successful tunnel escape in the camp's history.

Benson, who was the model for the figure atop Augusta's Civil War memorial, is most often remembered as a soldier.

However, his postwar life defies simple labels. He held such conventional jobs as cotton trader and accountant, yet he also published verse and philosophical writings, supported labor causes, worked tirelessly to exonerate the accused murderer Leo Frank, and earned respect as an amateur cryptologist.

Energetic and unconventional to the end, Berry Benson remains a fascinating figure to this day.