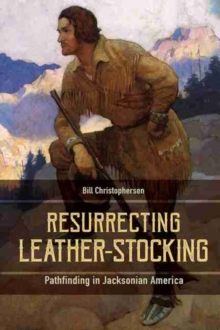 James Fenimore Cooper's Leather-Stocking tales - The Pioneers, The Last of the Mohicans, The Prairie, The Pathfinder, and The Deerslayer (1823-1841) - romantically portray frontier America during the colonial and early republican eras.

Bill Christophersen's Resurrecting Leather-Stocking: Pathfinding in Jacksonian America suggests they also highlight problems plaguing nineteenth-century America during the contentious decades following the Missouri Compromise, when Congress admitted Missouri to the Union as a slave state. During the 1820s and 1830s, the nation was riven by sectional animosity, slavery, prejudice, populist politics, and finally economic collapse.

Christophersen argues that Cooper used his fictions to imagine a path forward for the Republic.

Cooper, he further suggests, brought back Leather-Stocking to test whether the common man, as empowered by Jackson's presidency, was capable of republican virtue - something the author considered key to renewing the nation.