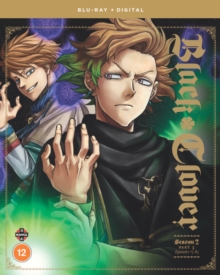 Another eleven episodes from the second season of the Japanese anime which follows orphans Asta (voice of Gakuto Kajiwara) and Yuno (Nobunaga Shimazaki) as they make their way in the magical Clover Kingdom, both attempting to be crowned the Wizard King.

The Nightmarish Charmy SP!' and 'Burn It Into You'.