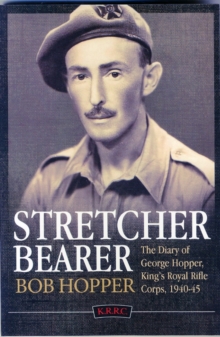 `In his khaki shirt and shorts and with his curly blonde hair, he looked so much like a little boy.

One leg was blown off at the knee leaving a ragged brown stump.

He was lying on his stomach, his head resting in his arms and it was just as if in his agony and his loneliness he had just turned over and died.' Excerpt ...

El Alamein, 26 October, 1942. George Hopper, ex-bank clerk and now Rifleman with the King's Royal Rifle Corps, begins his superbly illustrated diary in May 1940 by telling of the early frustrations of military life.

Eventually deployed to Egypt, George vividly recounts the horrendous conditions in the troopships and of Montgomery's epic 8th Army battle with Rommel at El Alamein.

As a stretcher bearer in the midst of the most violent warfare, his terrible and gruesome experiences resulted in the nightmares that were to stay with him for the remainder of his life. After journeying though Syria, Lebanon, Palestine and Israel the regiment finally departed from Alexandria in Egypt to take part in the invasion of Italy.

Here he recounts the bitter fighting that took place in the cold and mountainous areas around the infamous Monastery at Cassino, as the Nazis with backs against the wall made their last stand.

Victory finally came, but at an appalling cost in Allied lives. Ultimately deployed to the Military Mission to Greece, George experienced and wrote of the intense and treacherous civil warfare that took place after the Nazis departed as the Communists tried to take over Greece from the British supported Nationalists.

This was the beginning of the lengthy and disastrous Greek Civil War and led to what eventually became known as the`Cold War' with Russia. Masterfully written and illustrated, this is an epic story of one man thrown into the battlefields of Egypt, Italy and Greece.

From the Battle of Britain to El Alamein, to the invasion of Italy and the Greek Civil War, this is a historic account, both gripping and compassionate, of a world at war.