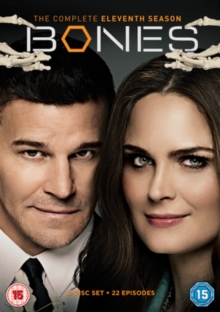 All 22 episodes from the eleventh season of the US forensic investigation series starring Emily Deschanel and David Boreanaz.

In this season, Booth (Boreanaz) and Brennan (Deschanel) investigate the mysterious death of a man whose organs have been harvested, the death of a U.S.

Senator leads an investigation to Capitol Hill, and the remains of an escape artist found in the woods sparks a search of the Magic Palace.

The episodes are: 'The Loyalty in the Lie', 'The Brother in the Basement', 'The Donor in the Drink', 'The Carpals in the Coy-Wolves', 'The Resurrection in the Remains', 'The Senator in the Street Sweeper', 'The Promise in the Palace', 'High Treason in the Holiday Season', 'The Cowboy in the Contest', 'The Doom in the Boom', 'The Death in the Defense', 'The Murder of the Meninist', 'The Monster in the Closet', 'The Last Shot at a Second Chance', 'The Fight in the Fixer', 'The Strike in the Chord', 'The Secret in the Service', 'The Movie in the Making', 'The Head in the Abutment', 'The Stiff in the Cliff', 'The Jewel in the Crown' and 'The Nightmare in the Nightmare'.