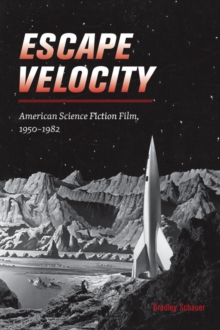 Part of the Wesleyan Film series

Today, movie theaters are packed with audiences of all ages marveling to exciting science fiction blockbusters, many of which are also critically acclaimed.

However, when the science fiction film genre first emerged in the 1950s, it was represented largely by exploitation horror films-lurid, culturally disreputable, and appealing to a niche audience of children and sci-fi buffs.

How did the genre evolve from B-movie to blockbuster?

Escape Velocity charts the historical trajectory of American science fiction cinema, explaining how the genre transitioned from eerie low-budget horror like It Came from Outer Space to art films like Slaughterhouse-Five, and finally to the extraordinary popularity of hits like E.T.

Bradley Schauer draws on primary sources such as internal studio documents, promotional materials, and film reviews to explain the process of cultural, aesthetic, and economic legitimation that occurred between the 1950s and 1980s, as pulp science fiction tropes were adapted to suit the tastes of mainstream audiences.

Considering the inescapable dominance of today's effects-driven blockbusters, Escape Velocity not only charts the history of science fiction film, but also gives an account of the origins of contemporary Hollywood.