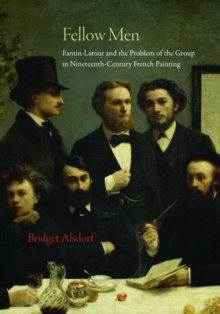 Fellow Men : Fantin-Latour and the Problem of the Group in Nineteenth-Century French Painting Hardback

Focusing on the art of Henri Fantin-Latour (1836-1904) and his colleagues Gustave Courbet, Edgar Degas, Edouard Manet, Frederic Bazille, and Pierre-Auguste Renoir, Fellow Men argues for the importance of the group as a defining subject of nineteenth-century French painting.

Through close readings of some of the most ambitious paintings of the realist and impressionist generation, Bridget Alsdorf offers new insights into how French painters understood the shifting boundaries of their social world, and reveals the fragile masculine bonds that made up the avant-garde.

A dedicated realist who veered between extremes of sociability and hermetic isolation, Fantin-Latour painted group dynamics over the course of two decades, from 1864 to 1885.

This was a period of dramatic change in French history and art--events like the Paris Commune and the rise and fall of impressionism raised serious doubts about the power of collectivism in art and life. Fantin-Latour's monumental group portraits, and related works by his friends and colleagues from the 1850s through the 1880s, represent varied visions of collective identity and test the limits of association as both a social and an artistic pursuit.

By examining the bonds and frictions that animated their social circles, Fantin-Latour and his cohorts developed a new pictorial language for the modern group: one of fragmentation, exclusion, and willful withdrawal into interior space that nonetheless presented individuality as radically relational.