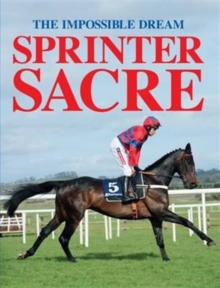 Legendary status was already assured yet it was Sprinter Sacre's return from the brink, his battle with adversity that has taken this horse of the ages into such rarefied territory.Drawing on the unique resources of the Racing Post, including many previously unseen photos, an extraordinary tale is told of a racehorse whose incredible looks are, for once, matched by his achievements.

Introduced to fences in 2011, he soon built an aura of invincibility that all presumed would last for years to come, but, in December 2013 that spectacularly vanished as the tribulation of atrial fibrillation reared its head.While he battled through, his greatest moments were in his past.

Despite the patience and expertise of trainer Nicky Henderson and vet Celia Marr, whose ultrasound and ECG readings are here to see, the spark of brilliance had fizzled out.Then in late 2015 that spark flickered into life before setting the sporting world alight as his story reached its most epic crescendo.