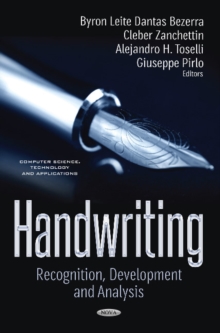 This book has the primary goal of presenting and discussing some recent advances and ongoing developments in the Handwritten Text Recognition (HTR) field, resulting from works done on different HTR-related topics for the achievement of more accurate and efficient recognition systems.

Nowadays, there is an enormous worldwide interest in HTR systems, which is mostly driven by the emergence of new portable devices incorporating handwriting recognition functions.

Others interests are the biometric identification systems employing handwritten signatures, as well as the requirements from cultural heritage institutions like historical archives and libraries in order to preserve their large collections of historical (handwritten) documents.

The book is organised into two sections: the first one is mainly devoted to describing the current state-of-the-art applications in HTR and the last advances in some of the steps involved in HTR workflow (that is, pre-processing, feature extraction, recognition engines, etc.), whereas the second focuses more on some relevant HTR-related applications.

In more depth, the first part offers an overview of the current state-of-the-art applications of HTR technology and introduces the new challenges and research opportunities in the field.

Besides, it provides a general discussion of currently ongoing approaches towards solving the underlying search problems on the basis of existing methods for HTR in terms of both accuracy and efficiency.

In particular, there are chapters especially focused on image thresholding and enhancement, text image pre-processing techniques for historical handwritten documents and feature extraction methods for HTR.

Likewise, in line with the breakout success of Deep Neural Networks (DNNs) in the field, a whole chapter is devoted to describing the designing of HTR systems based on DNNs.

Finally, a chapter listing the most used benchmarking datasets for HTR is also included, providing detailed information about which types of HTR systems (on/offline) and features are commonly considered for each of them.

In the second part, several systems also developed on the basis of the fundamental concepts and general approaches outlined in the first part -- are described for several HTR-related applications.

Last but not least, it is important to remark that to a large extent, this book is the result of works carried out by several researchers in the Handwritten Text Recognition field.

Therefore, it owes credit to these researchers that have directly contributed to their ideas, discussions and technical collaborations, and in general who, in one manner or another, have made it possible.