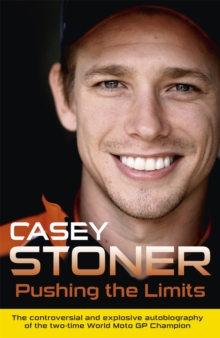 Casey Stoner, the two-time World MotoGP champion, tells his own explosive story. Showing anything is possible when determination meets talent, two-time World MotoGP champion Casey Stoner shares his incredible journey from being a Queensland toddler with an extraordinary ability on a motorbike to his decision to retire at 27 with nothing left to prove. For the first time, he tells of his early family life, the development of his riding skills and why his parents decided to sell everything and travel from Australia to Europe to chase the dream and support his aim to become World Champion when he was only 14 years old. As fearless with his opinions as he is on the racetrack, Casey includes all the highs and lows of his life so far: the real reason he left for Europe so young, his thoughts on racing as it stands today, the riders' hierarchy, the politics of racing, the importance of family, his battle with illness and why he decided to turn his back on a multimillion-dollar contract when he was still winning. And he also lets us in on some of the new goals he has set for himself.