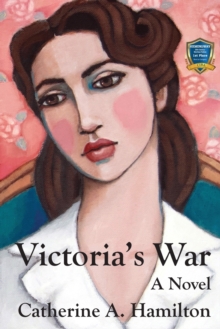 by Catherine A Hamilton

Victoria's War is a work of historical fiction about 19-year-old Victoria Darski, a Polish Catholic woman sold into slavery during the Nazi occupation of Europe, and Etta Tod, the 20-year-old deaf daughter of a German baker who buys Victoria. Poland, 1939: Eager to study literature at the University of Warsaw, Victoria waits with bags packed. But Hitler invades Poland and classes are canceled. German officers burst into her family's home, and Victoria’s world is turned upside down. She is ordered to work in a Nazi sewing factory. Making military shirts, Victoria sews a straight pin inside the collar in defiance. At a secret resistance meeting with her friend Sylvia, Victoria is captured and sold as a slave, with thousands of other women. Germany, 1941: When Victoria is purchased to work in a family bakery, Etta tries to protect Victoria from the brutality of her family, bringing food and companionship to the attic where Victoria is held. The two women form a quick and enduring bond, but when they’re caught stealing bread from the bakery and smuggling it to a nearby work camp, things take a turn for the worse. This spurs Victoria on to help rescue a group of mothers and babies from starvation. Victoria's War is a World War II story that hasn’t been told before, giving a voice to ethnic Polish women who were kidnapped into the Nazi slave labor operation. This lost chapter of history revealing wartime slavery is not to be forgotten.