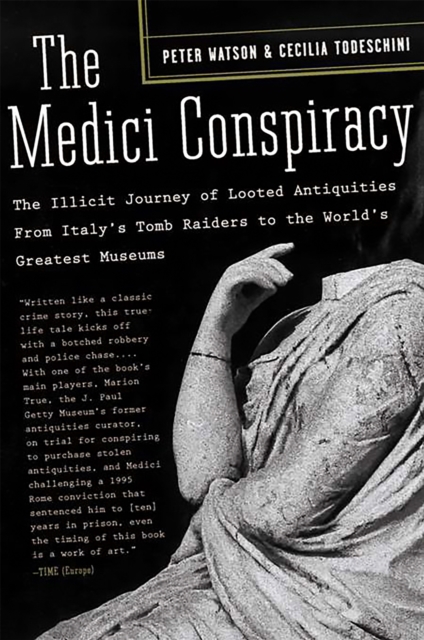 The Medici Conspiracy : The Illicit Journey of Looted Antiquities-- From Italy's Tomb Raiders to the World's Greatest Museums Paperback / softback

The story begins, as stories do in all good thrillers, with a botched robbery and a police chase.

Eight Apuleian vases of the fourth century B.C. are discovered in the swimming pool of a German-based art smuggler.

More valuable than the recovery of the vases, however, is the discovery of the smuggler's card index detailing his deals and dealers.

It reveals the existence of a web of tombaroli ,tomb raiders, who steal classical artifacts, and a network of dealers and smugglers who spirit them out of Italy and into the hands of wealthy collectors and museums.

Peter Watson, a former investigative journalist for the London Sunday Times and author of two previous exposes of art world scandals, names the key figures in this network that has depleted Europe's classical artifacts.

Among the loot are the irreplaceable and highly collectable vases of Euphronius, the equivalent in their field of the sculpture of Bernini or the painting of Michelangelo.

The narrative leads to the doors of some major institutions: Sothebys, the Getty Museum in L.A., the Museum of Fine Arts in Boston, and the Metropolitan Museum of Art in New York among them.

Filled with great characters and human drama, The Medici Conspiracy authoritatively exposes another shameful round in one of the oldest games in the world: theft, smuggling and duplicitous dealing, all in the name of art.