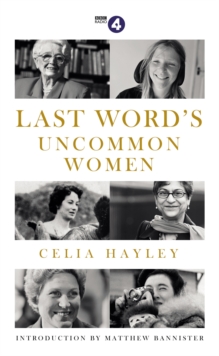 More than standard obituaries, the lives are summarised with narration and include interviews with some of those who knew them.

The programme was first broadcast in 2006 and this compelling anthology of the remarkable and revealing lives of women who were are illuminating, inspiring or moving.

Includes: Lt Islam Bibi - Helmand's top female police officer, shot dead by the TalibanNaty Revuelta Clews - Fidel Castro's mistress Naomi Sims - first black supermodelSylvia Robinson - The 'mother of hip-hop' who was the founder/CEO of Sugar Hill recordsRosalia Mera - Zara founder, the world's richest self-made womanMarie Colvin - war reporter killed in Homs Clare Hollingworth - Daily Telegraph reporter who was the first war correspondent to report the outbreak of the Second World WarEileen Nearne - wartime spy who was captured and tortured by the Gestapo Salome Karwah - Ebola survivor who went back to Liberia to nurse other sufferersJo Cox - MP murdered in her own constituencyJill Saward - rape survivor and campaigner for victims of sexual abuseScharlette Holdman - 'the angel of Death Row' who fought against the death penalty in the USJeanne Cordova - former nun who became a lesbian rights activistFrancis Kelsey - pharmacologist who prevented the licence of Thalidomide in the USMargaret Rule - archaeologist who raised the Mary RoseCountess of Arran - Powerboat racer, 'the fastest granny on water'