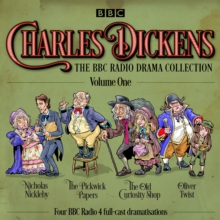 Powerful full-cast radio dramatisations of four of Charles Dickens' most famous novelsCharles Dickens is one of the most renowned novelists of all time, and this first volume of the dramatised canon of his work includes four of his best-loved stories. The Pickwick PapersMr Samuel Pickwick, founder of the Pickwick Club, forms a Corresponding Society for members to report back about their travels.

So begins the chronicle of their hilariously comic journeys. Oliver TwistBorn and brought up in the workhouse, orphan Oliver escapes to London - only to fall into the hands of the notorious Fagin and his gang of child pickpockets.

The duo are forced to leave their curiosity shop and go on the run... With an all-star cast including Pam Ferris, Tim McInnerny, Alex Jennings, Anna Massey, Ken Campbell, Tom Baker, Julia McKenzie and Sandi Toksvig, these BBC radio adaptations bring out all the humour, romance, pathos and tragedy of Dickens' four classic masterpieces.