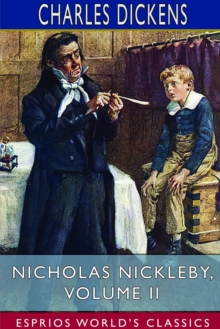 Nicholas Nickleby; or, The Life and Adventures of Nicholas Nickleby is a novel by Charles Dickens. Originally published as a serial from 1838 to 1839, it was Dickens's third novel.

The novel centers on the life and adventures of Nicholas Nickleby, a young man who must support his mother and sister after his father dies.

In this novel Dickens returned to his favorite publishers and to the format that was considered so successful with The Pickwick Papers.

The style is considered to be episodic and humorous, though the second half of the novel becomes more serious and tightly plotted.