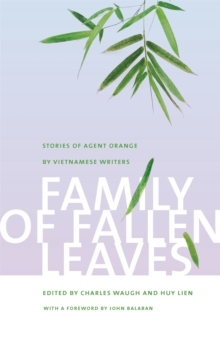 This collection of twelve short stories and one essay by Vietnamese writers reveals the tragic legacy of Agent Orange and raises troubling moral questions about the physical, spiritual, and environmental consequences of war. Between 1962 and 1971, the U.S. military sprayed approximately twenty million gallons of Agent Orange and other chemical defoliants on Vietnam and Laos, exposing combatants and civilians from both sides to the deadly contaminant dioxin.

Many of the exposed, and later their children, suffered from ailments including diabetes, cancer, and birth defects. This remarkably diverse collection represents a body of work published after the early 1980s that stirred sympathy and indignation in Vietnam, pressuring the Vietnamese government for support. "Thirteen Harbors" intertwines a woman's love for a dioxin victim with ancient Cham legend and Vietnamese folk wisdom. "A Child, a Man" explores how our fates are bound with those of our neighbors.

In "The Goat Horn Bell" and "Grace," families are devastated to find the damage from Agent Orange passed to their newborn children.

Eleven of the pieces appear in English for the first time, including an essay by Minh Chuyen, whose journalism helped publicize the Agent Orange victims' plight.

The stories in Family of Fallen Leaves are harrowing yet transformative in their ability to make us identify with the other.