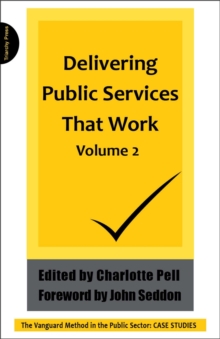 Behind the doom-laden headlines, a quiet revolution is taking place in the public sector.

In the police... hospitals... local government... social welfare... costs have been significantly reduced, services have improved and there is a real 'danger' of improving morale.

There is now no politician or executive in any branch of local government or any area of the public sector who can say: "It won't work here." The evidence is clear: it does work here, and right across the board.

Systems Thinking in the Public Sector explained how it was that so-called 'performance improvement' led to ambulances driving round in circles with ill people on board and benefits claimants having to complete the same form three times.

Two years later, in 2010, and in response to calls for evidence that Seddon's Vanguard Method really did offer the kind of dramatic improvements that he claimed for it, a first collection of Case Studies showed Vanguard's Systems Thinking approach at work in (mainly) housing and housing benefits departments.

This latest collection of Case Studies spells out the kind of dramatic performance improvements that have been consistently achieved in the NHS, the emergency services and a wide range of local authority departments.

It's a handbook for anyone faced with the apparently impossible task of improving service levels and dramatically cutting costs.

The Case Studies demonstrate again and again just how much can be achieved in a relatively short time using a Systems Thinking approach - transforming the lives of service users for the better in the process.

Part 2 has three topical briefings on the vexed question of 'demand' and why it is that increasing resources to meet increasing demand is so often the wrong answer.