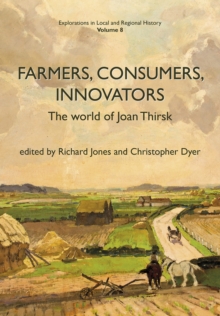 Joan Thirsk was the leading English agrarian historian of the late 20th century.

Perhaps best known for her research into regional farming, she also wrote much about rural industry, changing tastes and fashions, and innovations in the rural economy.

This book is based on a conference held in her honor (following her death in 2013) that was intended not to look back but rather to identify Joan Thirsk's relevance for historians now, and to present new work that has been influenced and inspired by her.