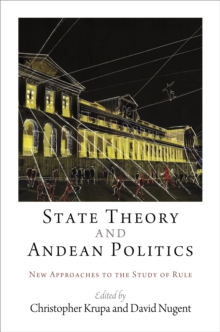 State Theory and Andean Politics : New Approaches to the Study of Rule Hardback

In the last few decades, Andean states have seen major restructuring of the organization, leadership, and reach of their governments.

With these political tremors come major aftershocks, regarding both definitions and expectations: What is a state?

Who or what makes it up, and where does it reside? In what capacity can the state be expected to right wrongs, raise people up, protect them from harm, maintain order, or provide public services?

What are its powers and responsibilities?State Theory and Andean Politics attempts to answer these questions and more through an examination of the ongoing process of state creation in Andean nations.

Focusing on the everyday, extraofficial, and frequently invisible or partially concealed permutations of rule in the lives of Andean people, the essays explore the material and cultural processes by which states come to appear as real and tangible parts of everyday life.

In particular, they focus on the critical role of emotion, imagination, and fantasy in generating belief in the state, among the governed and the governing alike.

This approach pushes beyond the limits of the state as conventionally understood to consider how "nonstate" acts of governance intersect with official institutions of government, while never being entirely determined by them or bound to their authorizing agendas.

State Theory and Andean Politics asserts that the state is not simply an institutional-bureaucratic apparatus but one of many forces vying for a claim to legitimate political dominion. Featuring an impressive array of Andeanist scholars as well as eminent state theorists Akhil Gupta and Gyanendra Pandey, State Theory and Andean Politics makes a bold and novel claim about the nature of states and state-making that deepens understanding not only of the Andes and the Global South but of the world at large. Contributors: Kim Clark, Nicole Fabricant, Lesley Gill, Akhil Gupta, Christopher Krupa, David Nugent, Gyanendra Pandey, Mercedes Prieto, Maria Clemencia Ramirez, Irene Silverblatt, Karen Spalding, Winifred Tate.