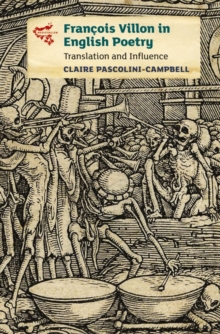 Attracted by his beguilingly pseudo-autobiographical literary persona and a body of work that moves seamlessly between bawdy humour, bitterness, devotion, and regret, Villon's heirs have been many and varied.

A veritable "poet's poet", his oeuvre has appealed to fellow versifiers in particular, providing a rich source for translation and imitation. This book explores creative responses to Villon by British and North American poets, focusing on translations and imitations of his work by Algernon Swinburne, Dante Gabriel Rossetti, Ezra Pound, Basil Bunting, and Robert Lowell.

They are presented as exemplary of the greater trend of rendering Villon into English, transporting the reader from the first verse translations of his work in the nineteenth century, to post-modern adaptations and parodies of Villon in the twentieth.

By concentrating on the manner in which individual poets have reacted to Villon, and to one another, the study unravels multiple layers of poetic relations.

It argues that the relationships that exist between the translated or imitated texts are collaborative as much as they are competitive, establishing a canon of Villon in English poetry whose allusions are not only to the French source, but to the parallel corpus of English translations and imitations. CLAIRE PASCOLINI-CAMPBELL holds degrees in medieval and comparative literatures from the University of St Andrews and University College London.